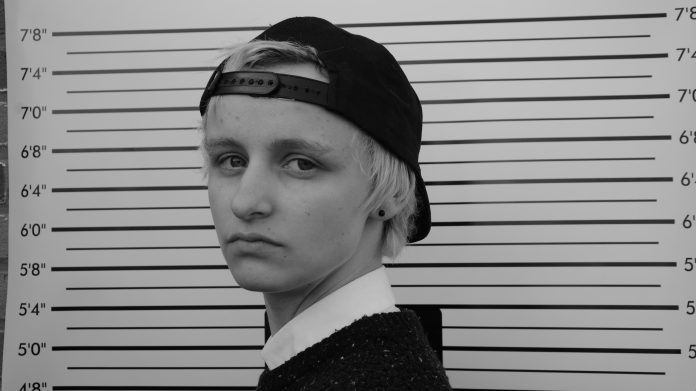 Our appointment was at 1 pm at restaurant 1e Klas on platform 1 of Amsterdam Central Station. A beautiful, nostalgic venue for a talk about a very contemporary subject. I was 10 minutes too early and he was 10 too late. I am a middle-aged gay man and he’s queer, young, non binary trans man. I was curious to hear about the impact to one’s life when one realizes his/her gender identity does not match his/her physical body. He was there to give me openhearted answers to my burning questions.

Noah’s appearance is pleasant and hip. Short, (dyed) blond hair. An open and friendly face with melancholic greyish blue eyes and beautiful mouth. His clothes are manly and wide and hide his female silhouette. He orders mint and ginger tea and i a coffee latte. We’re ready to talk.

Noah describes his youth as a happy time, regardless of his parents’ divorce. Both parents had other children with their new partners, so he spent his youth around two homes, surrounded by several half brothers and sisters. Only at the beginning of  high-school he experienced discomfort for the first time.  He had to make new friends, there was social pressure to live up to some expectations of behavior and at the new school there was little space for his creativity. He wanted to fulfill his own expectations of what a girl should be like. Expectations built by his mother and by the way girls are portrated in magazines and in the media in general. To look for a boyfriend ( without much success), doing girly staff and putting on a dress, every now and then. ” I felt as if i was cross-dressing or going to a dress-up party”, tells Noah. Since he was 12 he could feel that something didn’t “match”. He noticed that some of his friendships with girls went a bit far, but that didn’t really bothered him. He just called them “very special friends”.

His first coming-out happened around his 17th. After watching a TV program about coming out, he decided it was time to inform his family. No one was surprised. It had been more of an issue for himself than for his family. Yet coming-out did change his life. He could be more of himself and wear the clothes he wanted, although he didn’t feel the word “lesbian” was appropriate do describe him. This frustration kept growing and when he looked at his face in the mirror, everything from the neck down was telling him that something still didn’t feel right. Being a millenium, it didn’t take long before he came across words as “queer” and “non-binary” on the Internet. And what a relief that was! Up to then, transsexuality was for him a black and white thing. One could change from man to woman or vice-versa and that was it. When he realized that there were other people like him who didn’t necessarily wanted to identify to either male or female, he concluded he wasn’t alone.

He came out to his family again. This time he was prepared and had studied the matter in detail. He was happy that now he knew what he was. For his family though, this was a brand new subject. They knew nothing about it and this time they reacted with shock. In the words of a therapist he later visited: ” You were in a fast train to Paris and your family was still in a regional train.” Noah understands his family’s reaction because gender  dysphoria is often associated with heavy medical procedures. Noah wanted to have his breasts removed surgically. “Why cutting a body that is healthy?”  “Healthy?!” protested Noah. “Gender dysphoria, generates a lot of stress and dissatisfaction with your own body, which leads to deep unhappiness, often depression and in the worst cases even suicide.”

Luckily Noah feels supported by all his family members and friends now and he can also discuss this phase of his life, with them.

During my conversation with Noah I can notice that his body is an obstacle for him. He doesn’t like his voice nor his female shapes, which makes intimate moments uncomfortable for him. Why uncomfortable? He tells me that he sometimes found intimate moments disgusting the following day. He felt filthy if he was touched in certain places and approached as a woman. He had these feelings even before his body started to take a female shape. He had watched a Japanese film in which geisha’s bound their breast and decided that he would do the same when his breasts started growing.  But when the time came he lacked the courage. I suddenly realize how hard it must be for some with gender dysphoria to step into puberty. Every teenager feels a stranger in his his/her/their body but how does it feel if your body doesn’t feel like home? When your gender characteristics develop and make you feel even further from home? “As i child i was skinny and flat, so that wasn’t much of a problem” Noah tells me.

Eventually, this phase of getting to know himself better and discovering who he really was culminated last year in a visit to the Gender Policlinic of the VU Medical Center in Amsterdam. There, Noah is in the process of acquaintance appointments and hopes to get the green light to start his treatment, after his next appointment. He wants to start taking testosterone and have his breasts removed. From previous conversation with other trans people i had noticed some dissatisfaction with this long process of treatment. Specially the long waiting lists generate a lot of frustration. It must be awful to depend on other people to decide whether you can start a treatment to become who you ought to be. Noah is annoyed by the gender stereotypes which are applied in this decision process. For instance, a trans boy with long hair is not appreciated and he should have it short. Or that if you are in transition from a man to a woman, you’re expected to ride on a bike for ladies. Another reason for frustrations is that the surgical procedures must be done in The Netherlands because of the insurance companies but they often could be done better and faster in other countries. Still, Noah realizes that he has to deal with the system that is in place here and he considers himself lucky with his open-minded psychologist, although he has said “some weird stuff”.

A good thing is that since his last appointment he doesn’t need to go there by himself. He recently got a girlfriend and his eyes shine bright when he talks about her. She supports him and they can discuss the whole process.  She helps him relativize things, she’s always there, through thick and thin. ” She arrived in my life just at the right time”, concludes Noah.

Noah is a 22 years-old brave young man, trans with masculine features, boi (with an “i” )and non-binary. This last definition can only be assigned by the trans people themselves, Noah teaches me. He now defines himself this way because in the past he was forced to conform himself to the image of how a girl should behave. He had enough of it. Sometimes he feels like a boy, but also often like nothing specific, only “myself”. That’s when he is the happiest.

At the end of our conversation we talk about how complex all these new developments in gender identities are. Developments and subsequent terminology that an average  cisgender straight man can probably not follow. That even I, a LGBTQI activist, find difficult to follow. I make some silly comments about terms that are used differently by different people and Noah reminds me again that it should always be the person in question the one who decides who that person is and how that person wants to be referred to. ( Yes, I’m doing my bust not to use the wrong pronouns here).

Noah’s experience has given him the insight that many other have to go through a similar path as his and he hopes to be able to make it easier for them by sharing what he goes through with them on his on YouTube channel.

Thanks Noah for sharing your impressive story. I have my fingers crossed that life will give you what you hope for.